"The foundations of our society are Jewish. Christianity and Islam, the idea of human dignity, the democratic rule of law, gender justice or the social market economy cannot be understood without the knowledge of the Jewish share in development."

An important focus of Jewish Studies is to become familiar with rabbinic literature. The students should learn the basics of the Talmud and the Midrashim as well as the Halachic (religious-legal) works of Judaism. In this way, they will be enabled to independently explore selected topics and compare rabbinical theology with the ideas of other religions and cultures. In addition to rabbinical literature, the modern and modern Jewish philosophy of religion is also dealt with. Altogether, the students should receive a differentiated overview of the specifically Jewish contribution with its own accents on the history of religions.

Another focus is on the theological responses of Judaism to political, economic, social and ethical challenges. The discussion about this should help to recognize the importance of Judaism in general social developments. The topics envisaged reach to the present day, such as possible Jewish perspectives on the relationship between religion and politics discussed today, e. g. the establishment of democracy from Jewish religious sources, the comparison of different Jewish religious identities (liberal, orthodox, etc.), the relationship to other religions, Jewish economic and social ethics, Jewish feminism and gender issues, new challenges in medical ethics, etc. 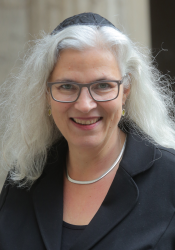